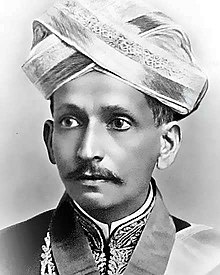 Mokshagundam Visvesvaraya, KCIE (popularly known as Sir MV; 15 September 1861 – 12 April 1962)[1] was an Indian engineer, scholar, statesman and the Diwan of Mysore from 1912 to 1918. He is a recipient of the Indian Republic’s highest honour, the Bharat Ratna, in 1955. He was knighted as a Knight Commander of the British Indian Empire (KCIE) by King George V for his contributions to the public good. Every year, on his birthday, 15 September is celebrated as Engineer’s Day in India in his memory. He is held in high regard as a pre-eminent engineer of India. He was the chief engineer responsible for the construction of the Krishna Raja Sagara dam in Mysore as well as the chief designer of the flood protection system for the city of Hyderabad.